"With the coming of Dean Moriarty began the part of my life you could call my life on the road." Jack Kerouac and"On the Road", Neal Cassady, author of "The First Third" an autobiography (1949) which enlightened Buddha, Allen Ginsberg and "Howl".The faster-than-light, holy beat power behind On The Road is gone. Cody, the incredible, always moving, sad-mad Dharma Bum is dead. The smiling TV tells me that Neal is dead in Mexico...dead beside the rail-road tracks. "One Time I rode a freight from New Mexico clear to L.A. - I was eleven years old, lost my father at a siding, we were all in a hobo jungle. I was with a man called Big Red, my father was out drunk in a boxcar...I didn't see my father for months."

Dean Moriarty was my all-time hero in high school, when I dreamed of the then- fading (nearly faded) Beat Generation. He was the personification of restless, searching holy, hopeful untamed youth. Dean Moriarity, who ( I learned a year after reading On The Road) was Neal Cassady, a one-time resident of humbly beautiful (long before Old Town 'art' center) Los Gatos. A great Titan.... a Super-hero had set foot in my home town.Two years ago, out of high school, into college (and many other important things), at a party near San Francisco given by super-hero No. 4, Ken Keasy, I met the immortal Mr. Cassady face to face and burned my brain, but lived to tell of it. "That's Neal Cassady, Man! That's Kerouac's old buddy!" from an excited friend.Cassady danced beneath a flickering strobe-light, moving as only the original impossible Neal Cassady could move. Saying, "Yes and hello there my friend, may the sun as it always does do it more in this particular configuration in which we are coming to you from just to the left of the angry red planet and if you don't believe, then by george you just better have a quick drink and then leave the room because nothing that'll happen here will come even close to convincing you...." "He's crazy!" "No, he's Neal Cassady. A Holyman. A Beat-saint." A thousand-thousand unbelievable storys (sic) about his mad adventures, told and repeated and marveled at and re-told. Neal Cassady....a legend. At parties he'd say, "I'm going out to roll the VW. Anybody wanna come?" and off he'd go to roll the car. Keep the wheel of life turning. Just for fun. "He's the best driver in the world. He drove a car without brakes from Colorado to Berkeley...non-stop." "He talked for three weeks once without stopping or repeating himself." "He drove a speed-boat right into a huge banana-boat in Mexico...just to show he could do it.""He was knifed in L.A. by the Mafia, but he hit the guy with his suitcase and talked the cop out of arresting him while still holding the knife in his side." He did other things...much more exciting, much more marvelous, that the newspaper would never print. His friends know. Forty-two years at six-thousand miles an hour. In Santa Cruz I watched him auction off paintings behind a beautiful monologue without the artist even suspecting what was going on. At the Big Beat he danced with a skeleton on Halloween. Pantomiming all-life with his eighteen-year-old body. Moving, moving, moving. Mr. Cassady, you left too soon. You left without saying goodbye...or maybe you said it a long time ago. When I learned of your death from quietly mourning Andrew, I flashed once again on the finity of this tiny scene. And followed it up with a flash of the infinity of the Big Scene. You saw it, Cody. You danced to it, Moriarty. You lived and laughed with it, Cassady. PEOPLE OF THE EARTH, YOU ARE FORBIDDEN TO FORGET. "Ah, man, don't worry, everything is perfect and finel" On The Road Part Three Chapter Three.

Note: As you can see, this is a very special edition, with pages removed and personal notes scanned in to properly convey the intimate nature of the messages. Going forward pages will be archived and the site navigation will offer the full site content. 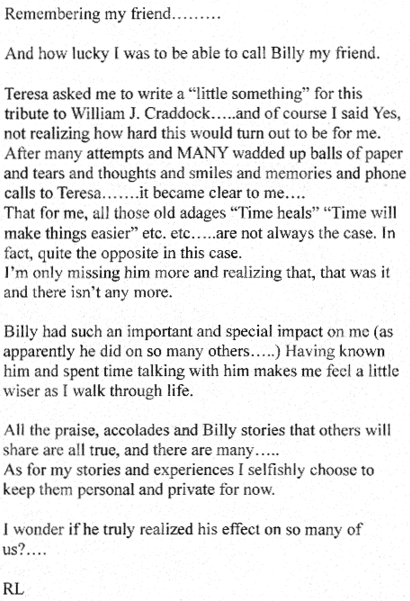 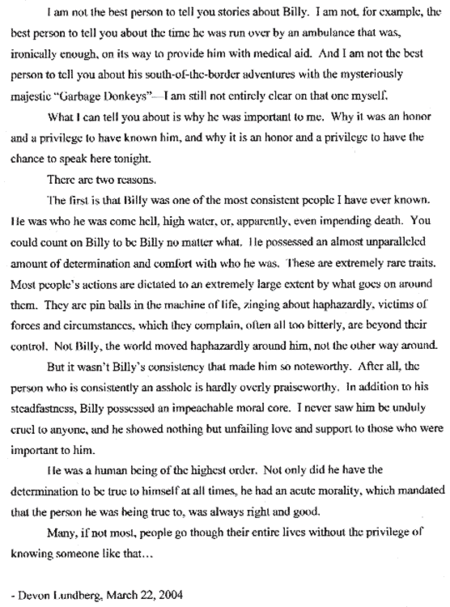 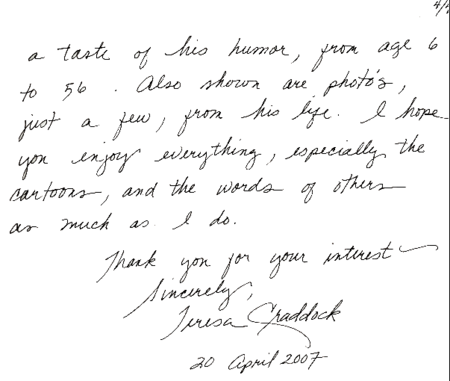 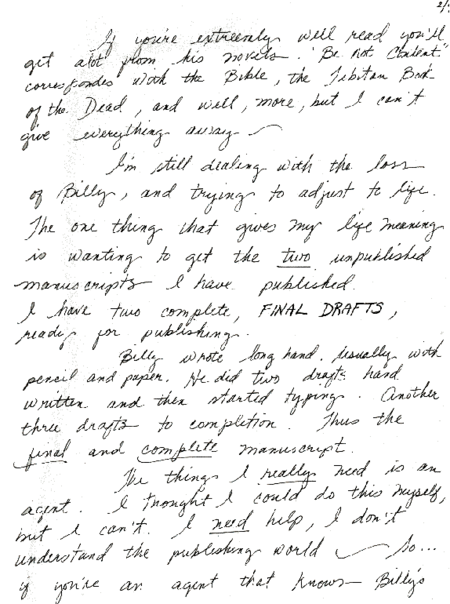 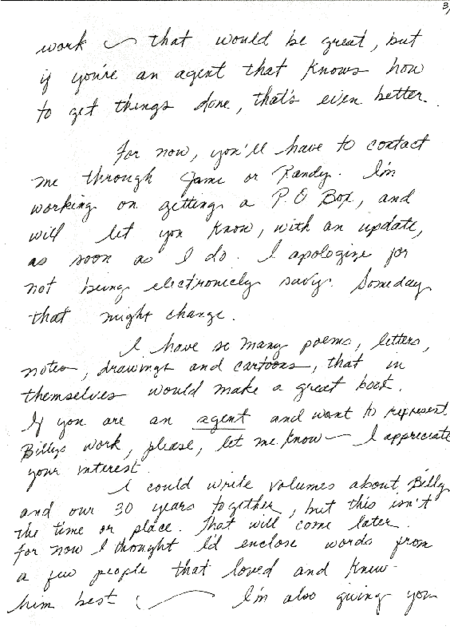 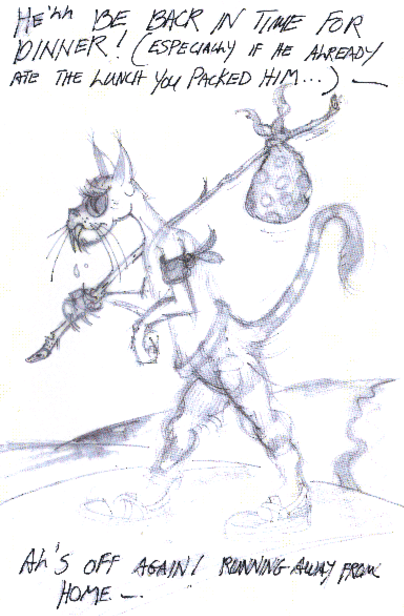 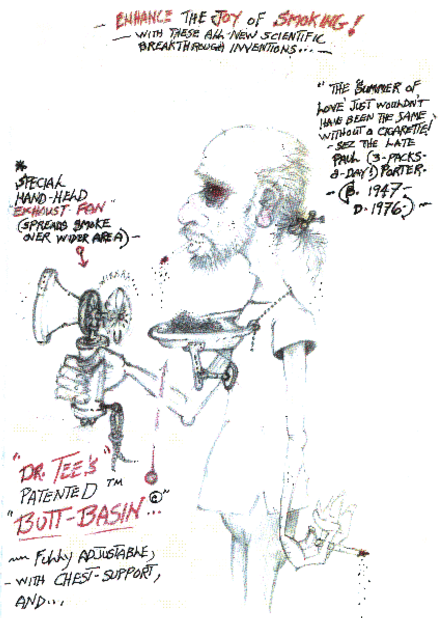 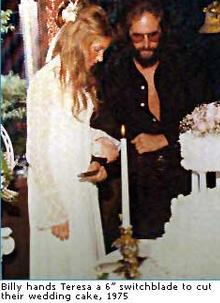 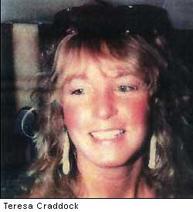 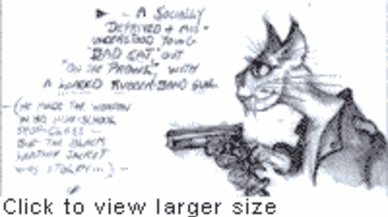 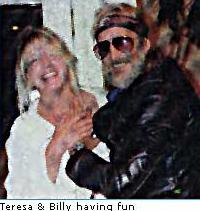 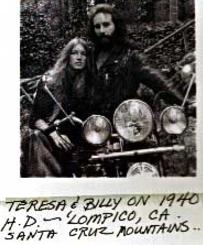 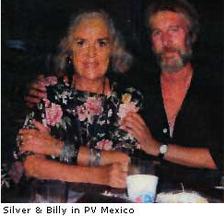 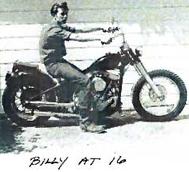 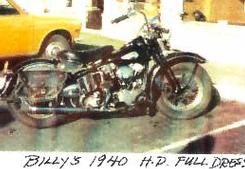 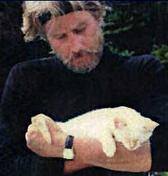 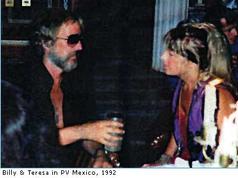 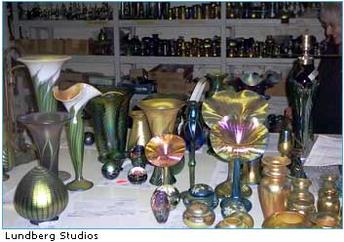 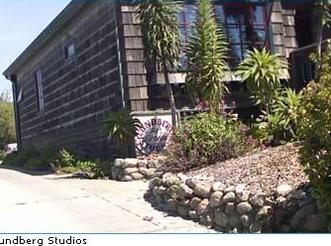 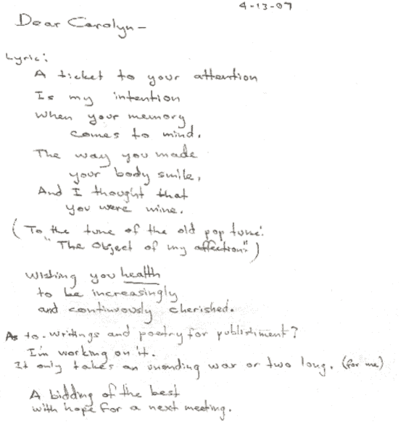 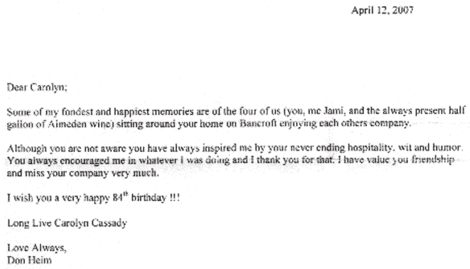 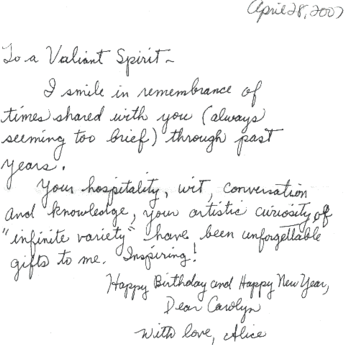 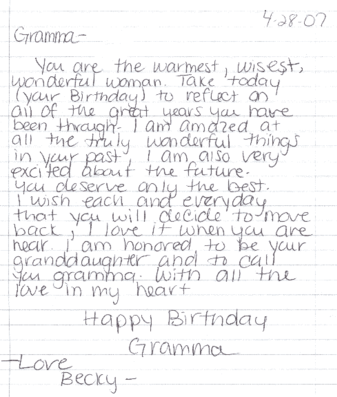 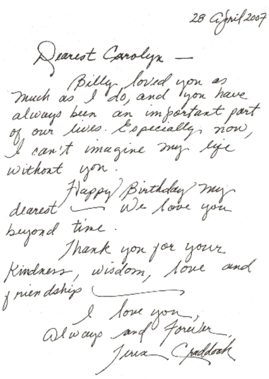 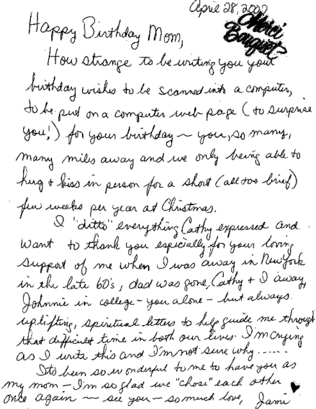 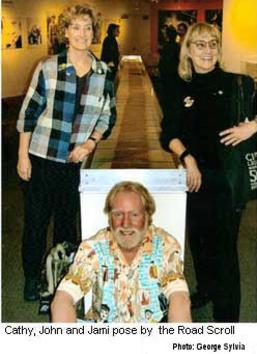 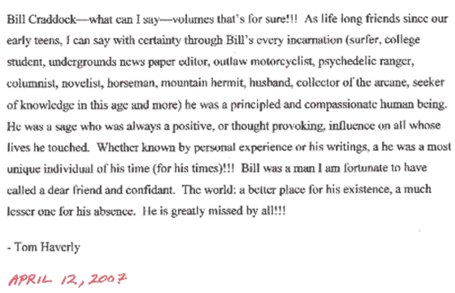 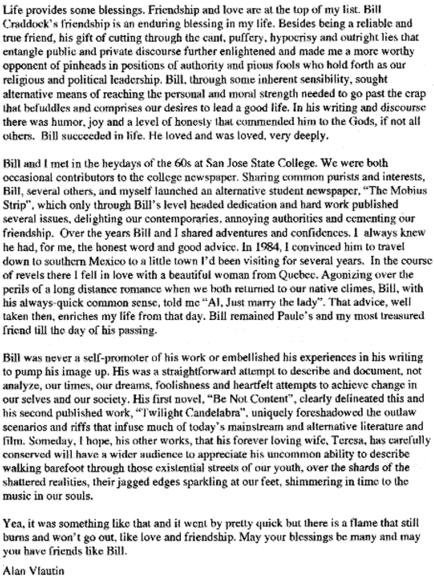 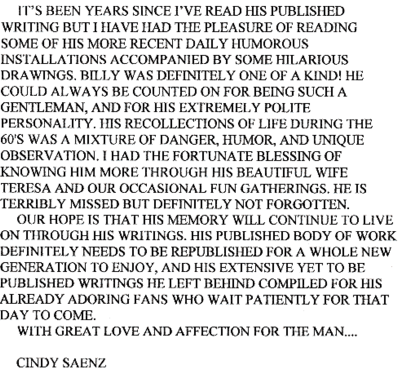